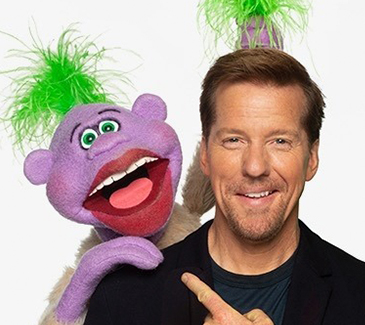 For more than twelve years, Jeff Dunham and his delightfully irreverent cohorts, Peanut, Walter, José Jalapeño, Bubba J. and Achmed the Dead Terrorist, have filled arenas across the U.S. and the world with their multiple blockbuster tours. Now, they are setting out on their brand-new international tour, “JEFF DUNHAM: SERIOUSLY!?”, hitting a total of sixty-three cities, crisscrossing North America and Canada.

In addition to his usual cast of irreverent accomplices, “SERIOUSLY!?” includes the newest member of the troupe, “Larry.” As the President’s personal advisor, he gives his hilarious take on what it’s like to work at the White House.

Dunham has built an entertainment empire over years of non-stop touring and performance innovation. With 10 million followers on Facebook and over 2.1 million YouTube subscribers, amassing well over a billion views, the comedian/ventriloquist has carved out his own unique space in the comedy world.

His accomplishments have led to record-breaking viewership with his standup specials on NBC, Netflix and Comedy Central. His astonishing arena-packing power has put him on par with major music acts such as Luke Bryan and Metallica.