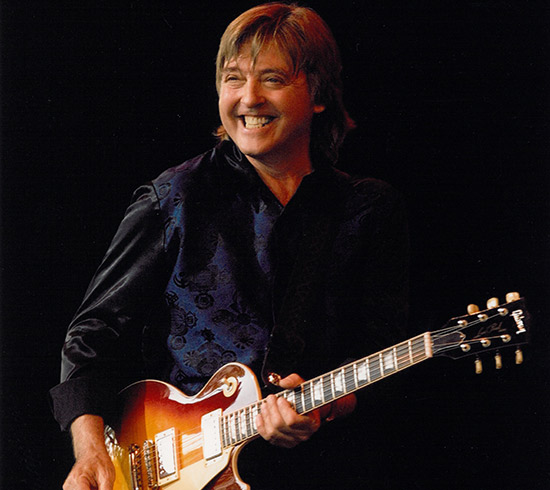 Joey Molland played in various bands in Liverpool around the time the Beatles took off and made history. Some of these bands played the same circuit and string of clubs as the Beatles, like the Cavern and The Blue Angel, and were also influenced by the same artists as the Fab Four, such as Carl Perkins, Little Richard, Jerry Lee Lewis, and of course Elvis Presley. Joey played in The Merseybeats, The Masterminds, The Fruit Eating Bears, The Cryin’ Shames, and Gary Walker And The Rain. He enjoyed the privilege of writing three hit singles in Japan with The Rain and played on such hits in England as Spooky and She Belongs To Me, with  The Masterminds.
Then in 1969, he was asked to join Badfinger. He moved down to London to live with the band and record their third album for Apple Records, The Beatles’ own label. The first album was made under the name of the Ivey’s, and the second was a reissue of songs from the first record and some new songs written for a movie, starring Ringo and Peter Sellars, called The Magic Christian. Joey appeared on the first ‘new’ album done under their new title Badfinger, (given to them by Neil Aspinall of Apple). He added some super rhythm and gave them a different direction with his rock’n’roll. He wrote more tunes than anyone else in the band and played almost all the lead guitar on the hit singles created by Badfinger in the 70’s. They had four top ten singles on the charts and they wrote one of the most famous hits of all time, Without You (done by Harry Nilsson in ‘72 and Mariah Carey in ‘94). Their hits include Come And Get It (which was given to them by Paul McCartney), No Matter What, Day After Day, and Baby Blue. The band toured America seven times in four years and recorded four albums for Apple Records, then two more for Warner Brothers until they lost Pete the guitar player in 1975. They reformed in ‘77-’78 with two of the former members and recorded two more albums. Joey also made two solo records, producing one by himself, while playing most of the instruments as well.
While in Badfinger, at Apple, he played on George Harrison’s All Things Must Pass album and played at the Bangla Desh concert in 1972 at Madison Square Gardens and on the album that followed. He also played with John Lennon on his Imagine album. He has produced several other bands in his career spanning 55 years in the music business. He has performed all over the world with other famous acts and artists, as Badfinger and as himself with his own trio. He has received rave reviews worldwide for his music and records and has published over 60 songs on CDs and albums through the years. Also adept at a bit of comedy, he has had them rolling in the aisles with laughter for years, with his Liverpool wit and talent shining through in each new song or phrase that he writes.
Joey is currently touring and recording with Joey Molland’s Badfinger; it is a real treat hearing these ageless hit songs played by such an exciting band from such a notable career.